The Panasonic HX-A500 is a high-end cam action, and the particular design that relies entirely on the resolution 4K Ultra HD.

Panasonic has launched its first real action cam, and did so with a very unique approach. The Panasonic HX-A500 immediately struck by the unique design in the current landscape, with his goal separated from the main unit. In addition, reading the letters following the name written on the dice, it turns out that it is capable of recording in 4K resolution.

Panasonic cannot boast of having produced the first action cam 4K, perhaps, having followed the GoPro hero3+ Black Edition for about a year, but as the market leader in the records only 12.5 frames per second, with obvious compromises in of fluidity, the Panasonic HX-A500 not only captures clips at 25 fps, but it does the high bitrate of 72 Mbit second. In addition, the Panasonic HX-A500 offers much more, such as an LCD screen 1.5″ on the main unit, the support of Wi-Fi and protection from dust and water.

The design of the Panasonic HX-A500 back in time, the first attempts to camcorders intended for action sports, in which the lens was separated from the main unit, which in turn housed both memory and the battery pack. Only with the advent of the first GoPro there was a paradigm shift with regard to the design, through to a structure ” all-in-one. ”

The Panasonic HX-A500 on one hand the sleeve can be found in the stabilized fixed lens with a focal length of 3.4 mm and aperture of f:2.8, the MOS sensor backlit ½, 3″ and 12.76 megapixle Total (9.03 and 8.34 respectively for megapixel still and moving images) and the mono microphone. On the other hand, the control electronics, with an LCD screen 1.5″ 115,200 pixel, three control buttons, including a joystick to navigate the menu, an integrated lithium polymer battery of 1,450 mAh, a door USB slot for SD memory cards.

These last two are accessed by opening a door sealed with a switch for secure closure, an approach which was necessary in order to comply with international regulations and IPX8 IP5X: the Panasonic HX-A500 is resistant to dust and water, as well as be waterproof up to three meters.

Overall, the construction is solid, giving the idea of ​​a camera that can withstand hours and hours of footage in the most extreme conditions. One cannot say that it is compact, with a footprint not indifferent, that it is necessary, for example, hold the main unit in your backpack when the lens is mounted on the helmet (as well as making it less easy to use in winter sports or otherwise in any situation where you want the maximum freedom of movement). 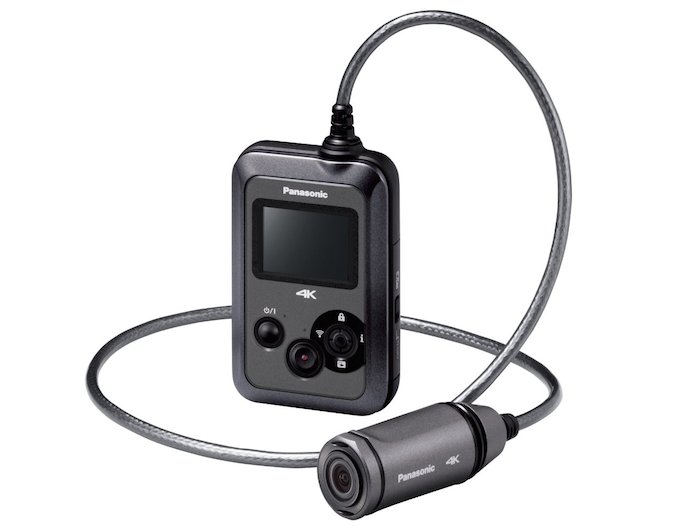 The key feature of the Panasonic HX-A500 is, of course, the recording format 4K Ultra HD at 3,840 × 2.1260 pixels in 16 : 9, 25 progressive frames a second and a maximum bitrate of 72 Mbps second. It follows that, if you want to take advantage of the highest quality and resolution in the recording, it is better to have a memory card with at least 64 GB, which can capture up to two hours of video.

The options for capturing video clips do not end there: you can also choose between the traditional and wide field of view ultra wide angle (160 degrees), but only for lower resolutions at 4K and the second leading to obvious and unpleasant distortion.

All this is thanks to the BSI sensor MOS ½, 3 “, a size slightly greater than that found on the current action cam, bringing as a secondary consequence a low noise in low-light shooting. When the shooting conditions become difficult, it comes in handy digital image stabilizer, a feature particularly appreciated by mountain bike or trail running, thanks to the ability to dampen vibration and swaying. For loans less extreme, Level Shot comes in handy function, which automatically detects the tilt and back in the recovery plan.

Unfortunately, you have to do without both functions when shooting in 4K, operating only at lower resolutions and frame rates of 25 fps. Much appreciated is the ability to compensate for backlighting and manually set the white point, besides being able to choose from five presets (Auto, Extension 1, Extension 2, Sunny, Cloudy).

The menu of the Panasonic HX-A500 is easy to understand and use. Despite the size and the limited resolution of the built-in display, navigation is simple as well as the selection of methods of recording and of various options: image stabilization, white balance, backlight compensation, night mode, viewing angle.

There is also support NFC and the now indispensable Wi-Fi with the camera that becomes a point of direct access that connects the mobile device, thus avoiding the use of an existing access point (for example, the home Internet connection or office, a mode already planned).

Control is via the tool Panasonic Image App, available for Android and iOS: is enabled full control of the camera, allowing them to take advantage of a screen much larger than that defined and built on the Panasonic HX-A500. Do not miss additional features, such as a very limited editing on the images and video, and broadcast live streaming service Ustream advantage.

The Panasonic HX-A500 was put to the whip in all conditions, especially in sessions of mountain biking and trail running. The 4K mode is more than just a gimmick or bait and switch, the quality of the footage is exhilarating for richness of detail, vividness and color accuracy. It is only in this resolution that you can enjoy an exceptionally realistic, losing naturally in detail when it comes down to appreciable Full HD.

Unfortunately, the digital image stabilizer is activated only with a frame rate of 25 fps, a limitation may be due to the motor image processing. It would have been better to enjoy still images and stable even at 50 fps, shooting even more fluid and details even higher in the action scenes more excited. Just as it would have been preferable to have a professional inspection of all shooting options, such as Protune be activated on the GoPro hero3+ Black Edition.

Overall, though, also because of the possibility to enable the control of the backlight and manually select the white point, the captured clips are placed above average for fidelity and sharpness. Only the obvious distortion in wide mode is the natural price to pay for having such a wide angle of view, a defect common to most of the action cam. The Panasonic HX-A500 convinces even in low-light conditions, with a perceptible detail and a noise surprisingly content.

It is not easy to remain indifferent towards the Panasonic HX-A500. The real plus is the ability to shoot at 4K resolution with 25 frames per second, a feature well implemented by the Japanese brand, which has set a new benchmark in the field of action cam. The HX-A500 is not only resolution: the direct or via smartphone is complete and intuitive.

Unfortunately, the limit of the true and great action cam Panasonic is the design, which leads to trade-offs in terms of portability of the main body. In any case, the gauntlet was launched at GoPro hero3 Black Edition, but only with a series of accessories wider and versatile and with a graphics engine capable, which free all the potential also in control of shooting options The Panasonic HX-A500 will be able to seriously worry the leadership as action cam market benchmark, both for the consumer and for the prosumer world.

Where to Buy Panasonic HX-A500 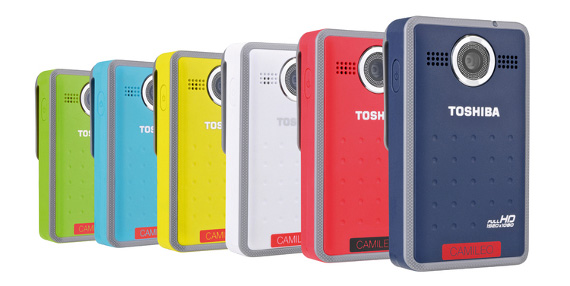 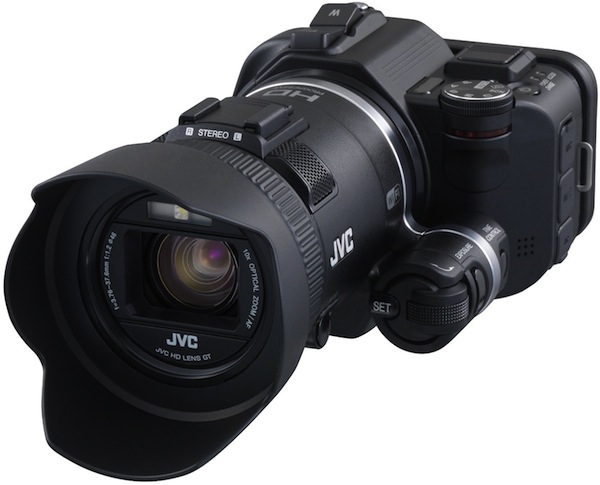 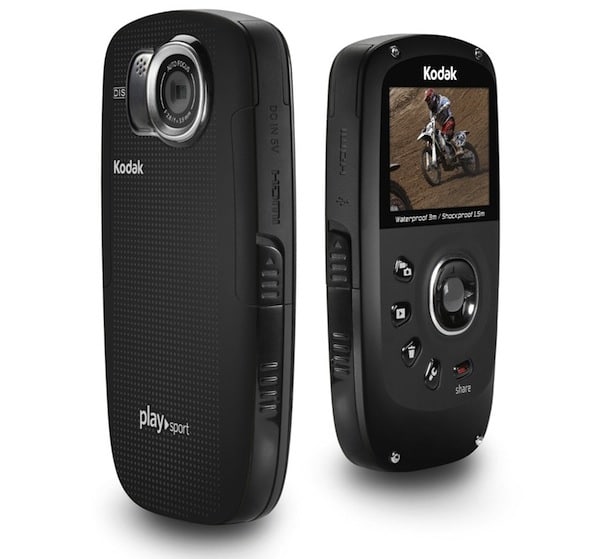 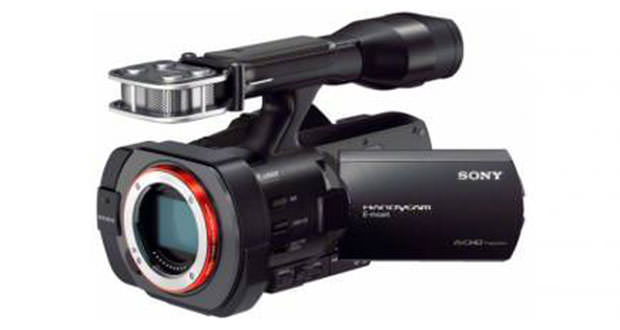 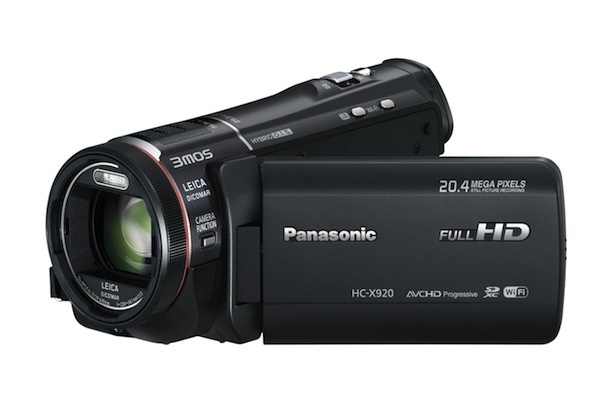 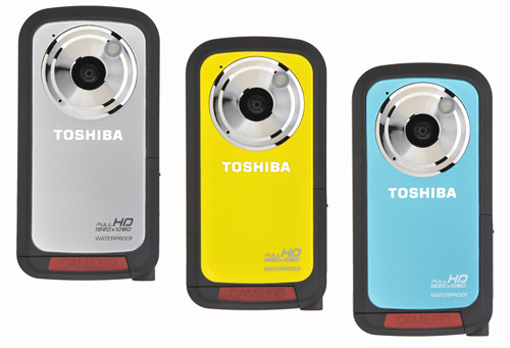