Club 3D is a Dutch manufacturer of graphics cards, power supplies and accessories for personal computers mainly related to the audio-video. Founded in 1997 under the name of Colour Power, the company became the Club 3D 2005. The company was immediately one of the pioneers in the marketing of graphics cards for S3 Graphics, 3dfx, ATI Technologies and Nvidia, as well as being  the first private company in the world to market under the same brand graphics cards AMD and Nvidia.

The company has its headquarters in The Netherlands, with sales offices in Germany and North America. The mission of CLUB3D is to provide the best solution for their market partners and customer’s enthusiasts. Company policies that provide a friendly approach, flexible, focused, fast and fun helps build a lasting relationship and achieve maximum satisfaction to the customers.

In 2010, the company officially launches its line of accessories for PC, while in 2011 the Club 3D begins commercialization of power supplies and high-end graphic cards powered via USB ports called SenseVision. 2013 finally sees the sale of relations with Nvidia, which will still be marketed earlier generations, while still continuing the partnership with AMD.

In a world premiere in the official launch day (day-one) the new graphics card based on the new AMD GPU R9 285 to be precise, we will analyze the proposal made by Club3D for this new architecture. The Club3D Radeon R9 285 with 2 GB of GDDR5 memory and is characterized by the cooling system owner CoolStream specially revisited for this new proposal. 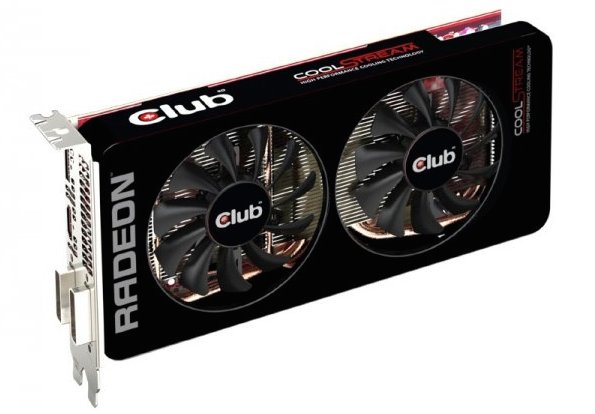 For this new GPU Radeon R9 285 AMD has not made any kind of rebranding, developing new GPU codenamed Tonga Pro directly from the GPU Pro Hawaii, used in the Radeon R9 290 The name ” Tonga ” is not new to graphics cards AMD.

This nomenclature has been used for the GPU that equips the professional graphics card GirePro W7100 from which it derives Pro Tonga. With the AMD GPU Tonga Pro offers exactly the same line addressed by Nvidia with the new architecture Maxwell, where, thanks to greater efficiency, it was possible to improve the performance of previous architectures but with a lower apparent power.

A quick look at the technical specifications of the whole emerges immediately makes all the effort of AMD in proposing an update of the R9 280 which could at the same time be ensuring greater energy efficiency while maintaining the performance. Despite the handicap of the bus ” castrated ” we are faced with a solution that should provide much better performance in line with the previous proposal, all with a low-power  consumption of about 10W, as underlined by different carat weight of auxiliary connectors required, which rose to a simpler solution to the 6-pin (two connectors).

The new GPU Radeon R9 285 shows that AMD has succeeded fully in order to offer a product optimized fuel consumption but at the same time was able to   provide performance comparable to the previous generation with the considerable added value that adopting the latest technology AMD, so far only present in the R9 and R9 290 and 290X GPU solutions based on Bonaire.

The solution-reviewed today by our team is the variant developed by Club3D and cooled by the cooling system owner CoolStream in order to allow a better margin of operation in overclocking. The cooling system of dual fan is actually quite efficient, but, compared to the refined aluminum cover present in the solutions RoyalQuenn / RoyalKing and RoyalAce views in previous graphics cards, in this case Club3D has opted for a cheaper plastic cover, which compared it is less attractive, as well as less powerful (the aluminum cover, actively participates in the dissipation), but probably the Dutch company plans to use the system more refined to equip additional versions of the R9 285 in the near future.

The renewed architecture is thus able to ensure better performance of the previous series, lowering fuel consumption and ensuring all the latest technologies such as TrueAudio and Project FreeSync, in addition to full support for the new generations of technologies AMD CrossFireX and AMD PowerTune, which ultimately makes this product even more innovative and interesting.