BlackBerry Z30 smartphone is a top of the range 5-inch screen and BB10 operating system designed for maximum mobile productivity.

The complex vicissitudes that are from time involving BlackBerry are now known, including items related to the sale of the brand and rumors of a possible bankruptcy of the company. It is perhaps for this reason that the launch of a smartphone like the BlackBerry Z30 takes a little surprise.

Whether it’s the swan song or a shot of the back to recover, it is for sure that such a product would have deserved best moments, and above all a better timing. What is to all intents and purposes the new flagship model of the Canadian producer comes too late on the market compared to those who are its features a 720p Super AMOLED screen 5-inch, dual-core processor 1.7 GHz, 2 GB of RAM, 16 GB capacity, LTE, solid construction and elegant, a handsome battery and a powerful camera.

As we will see the BlackBerry Z30 is a great end to all intents and purposes, with a few flaws, but it has been superseded specifications for a flagship that, at least in theory, should annoy products from the likes of the Samsung Galaxy S4, iPhone 5s, LG G2, or the Nokia Lumia 1020 (just to mention some of the most recent), but what if he sees with equal only in terms of the price, of course, is not good.

If the BlackBerry Z30 had arrived at the place of the Z10, several months ago, now we’d be talking about a top model in every respect, including the design. Definitely nicer than its predecessor while pleasant is enhanced by a chin brushed metal that contrasts with the rest of the front surface, entirely black, and continues around the edges, giving the smartphone a stylish look and solid construction at the same time.

Large, but not bulky (140.7 x72x9, 4 mm) and offers plenty of grips in the hand despite its 170 grams of weight, about the blunt shape of all the corners of the back cover and carbon fiber-feeling rubberized non-slip. The latter is easily removable, giving access to the SIM and microSD slot (supports up to 64 GB) and sealed battery from 2,880 mAh.

The elegance of the BlackBerry Z30 is further emphasized by the lack of physical buttons below the screen input (the operating system BlackBerry 10 is controlled entirely via touch controls). The only buttons are the on / stand-by at the top next to the 3.5mm jack, and the volume rocker, side, can also be used for the functions of the camera and the music player, as the case. This also holds within it the key direct access to voice control, an answer to Siri and Google Now, which plays a decent job and also offers a practical guide to the most commonly used commands. On the opposite side, here are the microUSB and microHDMI taken while on the back there are the camera with LED flash and grilles for stereo speakers (two at the bottom and one at the top) from the clear and powerful sound in both the speaker phone is in music reproduction.

The front part, of course, is dominated by the display, as I said a 5-inch, which has a resolution only HD (1280 × 720 pixels) and a density of 295 ppi, therefore, not particularly high. The viewing angle is great, and the picture quality is good but not on par with that reproduced by the models mentioned above. Entirely covered in glass, the surface also houses a second 2 megapixel camera, light sensors and proximity and the capsule sound.

The camera of the BlackBerry Z30 has a resolution of 8 megapixels, a sensitivity of f/2.2, it is equipped with LED flash, stabilizer, autofocus and 5x digital zoom. It can also shoot video in Full HD. The performances are generally good photographs, beginning with the shutter speed. Although the focus is quick, if you use the physical button to shoot, while using the touch screen for greater accuracy at the point of focus speed drops.

The picture quality is pretty good when shooting conditions are ideal, ie outdoors in well-lit environments: the pictures are bright and detailed, and feature bright colors. Unfortunately, indoors, or, generally, in conditions of low light performance drop significantly, ending up with even worse at night, a situation in which more than anything else the flash tends to flatten and tone colors.

What we have just said about the photos can also be applied to videos. We add an account on the stabilizer, which fails to adequately correct the micro vibration, and on the microphone, which instead does a good job in mitigating the noise of the wind. The Camera app is basic but functional, allowing you to choose between four shooting modes (Normal, Stabilization, burst and HDR), five scene modes (Auto, Action, Blackboard, Night Beach or Snow) and three ratios (1: 1, 4:3 and 16:9), and also includes Face Detection. In video mode, the choices are even more limited: the shooting modes are Normal and Stabilization, those scene are Auto, Night Beach or Snow, and you can activate the LED light sets for the night shots.

The BlackBerry Z30 based his performance on the power of a Snapdragon S4 SoC with dual-core processor Qualcomm MSM8960T Pro 1.7 GHz, a good solution to ensure a performance level, but as said earlier, below the current standard top range of that see, usually, the adoption of a Snapdragon 800. In support, intervene 2 GB of RAM.

Overall, the BlackBerry Z30 is a smartphone fast, even on BlackBerry 10 OS. The opening of the various app is rapid, multitasking (up to 8 simultaneous app) is very fluid and are not noticed slowdowns in general. Only the initial lighting of tune because it takes about a minute. The 2,880 mAh battery supports brilliantly energy consumption, ensuring up to two days of normal use or a full day of heavy use of the device, including Web surfing via Wi-Fi, watching an entire movie, messaging and social varied, calls, etc..

The result is smoother and faster browsing experience, well supported by the BlackBerry Browser, which is comparable in function and performance to Chrome, except for the lack of a bookmark syncing with other devices, since there is neither a desktop or tablet to other operating systems. It also supports Flash natively and has a practical function of reading, which strips web pages with images and advertising.

In contrast, the audio quality has proven only average, with occasional background noise and a sound sometimes metallic, so much in entry as in exit. Appeal there, finally, the usual sensors: accelerometer, magnetometer and gyroscope, in addition to the aforementioned light sensors and proximity. There are also the NFC chip with A-GPS support and GLONASS. The latter has proven to be a quick fix of the signal and operates in combination with TomTom maps are included in the BlackBerry Z30 to offer a vehicle navigation turn-by-turn directions with a lot of traffic in real time and POI.

The BlackBerry Z30 uses the latest version of the BlackBerry OS, the 10.2, which improves stability and performance and introduces some small innovations, such as notification and consultation quick email and twit directly into the lock screen and a greater ability to customize the Hub. For those not accustomed to BlackBerry 10. It is best to proceed step by step and explain briefly the operation.

All in BB10 is handled with touch controls, which are four, and very intuitive. Once you turn on the display, just slide your finger from the bottom to the top to unlock the screen. With the same, movement comes from any app open and direct access to multitasking, with the latest app you use (some are updated in real time with new texts and images, like the live tile in Windows Phone).

Slide your finger to the left leads to the Hub, which is a kind of sole manager of all contacts from email to phone calls. Since it is customizable, you can limit how best we believe the number of notifications here, in order to streamline the consultation. In addition, the system allows you to manage multiple accounts separately and gradually learn what are the most important contacts for the user and gives them priority.

It can also be accessed from the hub to the messages on the phone and BBM, the messaging system similar to BlackBerry users (and earlier) to apps like WhatsApp and the like, and recently also available to Android users and iOS with the release of a finally compatible application.

Slide your finger to the right door the list of installed apps. With a motion from top to bottom, finally, opens the quick access menu, where you can find various items, including the direct control of the Wi-Fi, Bluetooth and brightness, airplane mode and menu settings, very large but easy to use.

About composing messages and texts, it must be said that the virtual keyboard of the BlackBerry Z30 is very good, about an efficient predictive and self-correction, and the large and well spaced buttons make it easy to write (is even reproduced graphically the metal line that, in the version seen in the physical Q10, separating the rows of keys). Instead, absent the swipe function.

As said earlier, the impression is that the BlackBerry Z30 arrived too late on the market than when it was conceived on the tables of the designers. This is demonstrated by the fact that what the company considers its top of the range has specific that would have been the height of a similar level a few months ago, but which are now obsolete.

Competition is fierce, and a similar delay weighs undoubtedly not only in our evaluations, but also on the fate of the product may have. On him rests also a store does not rise to the occasion, which limits considerably the potential and a camera is not always convincing.

This is a great smartphone, the value of which is embellished by a sophisticated design and elegant and a solidity that strengthens the perceived value. Born in mind with the productivity and business users, offering an operating system practical, intuitive and fast, and already updated with new features with the main tools to communicate and work in mobility.

It also has a good screen, app for music and video and clear sound, so it can offer even beautiful moments of leisure and autonomy is one of the best views on a smartphone at this level. The fear is that this is not enough for the Z30, and even more to the BlackBerry, to improve his lot. But that’s another story.

Where to Buy BlackBerry Z30 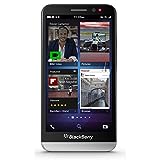 CONS : Fluctuating room, The BlackBerry World endemically poor content, Comes too late on the market.
User Rating: Be the first one !